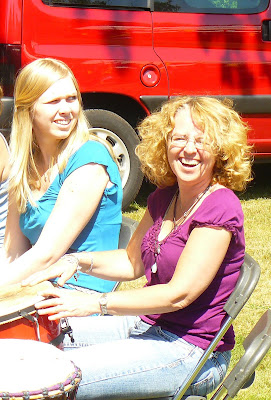 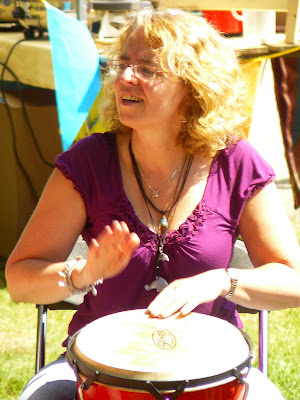 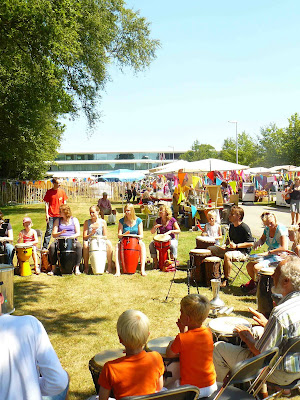 Finally the sunny and more than warm weather has arrived! It's Summer!!!
This weekend we had a bbq on Saturday with Cor, Zander, one of his 2 friends and I. It was nice and I'm so glad to see that Zander totally accepts Cor now. It almost took him a year to adjust to this new situation.
Yesterday Cor and I went to our Municipal Hall, together with a lot of other people from our community to try and break the picnic record for the Guiness Book of Records. We didn't succeed but it was fun and all for free. There were lots of other things to do and Cor and I took a workshop Djembe. I liked it so much that I also took the second class. Cor went to the hairdresser to cut off his long hair and it looks great!! I had my eyebrowes done with a thread. The lady who did them worked very fast and in no time she gave me beautiful eyebrowes.
Back at home we sat in the garden under the trees and enjoyed this refreshing breeze. It was a perfect weekend!!! Hope yours was too!
Posted by Anniek at 3:56 AM 1 comment: 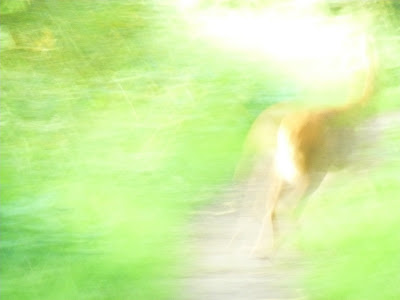 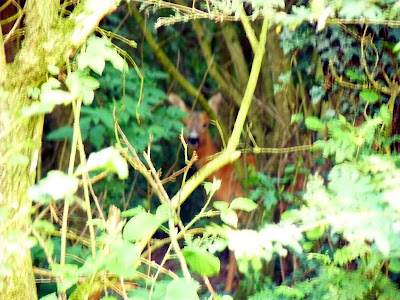 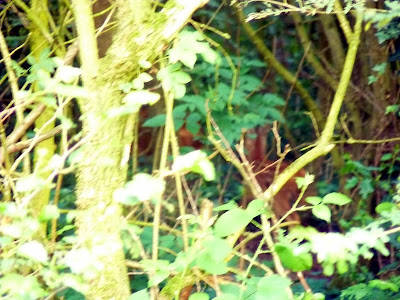 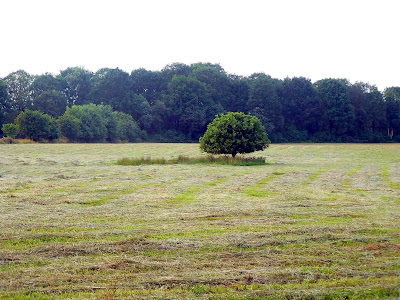 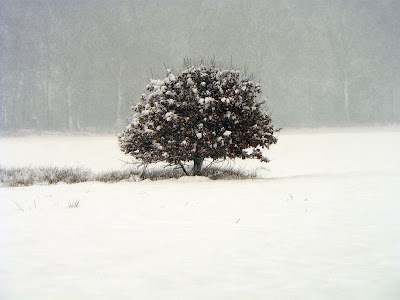 This evening I went for a walk close to my house and I took my camera with me. I was hoping to see some deer and I was lucky. I startled a deer that was very close to the path. I tried to take some photos while she was looking out for a way to escape but she was very fast and there were a lot of obstacles between her and me. Finally she ran into a small piece of wood and when I went over to look for her I saw her with her baby. I managed to shoot a couple of photos of the mother but her little one was behind her and a lot of branches. It was only when the mother decided that she and her little one weren't in any danger that I could take a photo of the behind of the fawn when it walked away behind it's mother. The photos aren't my best but as you can see there where a lot of branches between my camera and the deer and I also had to use the 12x optical zoom which makes it even more difficult to get clear and steady photos.
I also took a photo of a small tree that is standing in the middle of grass-land. I took a photo of the same tree last winter when there was lots of snow. I'll upload them both in this post so that you can see for yourself how lovely this little tree is all year round.
Posted by Anniek at 12:45 PM No comments: 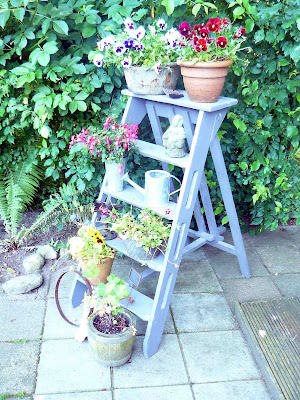 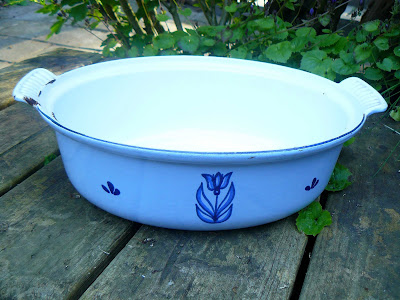 When I was at Cor's place last weekend we went to "Het Goed" in Hoogeveen. It's a great recycle store where I love to go. I bought some warm clothes (because it was really cold this weekend and I forgot to bring some warm clothes with me) and in the back of the store I saw an old wooden step-ladder which I have been looking for for quite some time. The best part is that I got it for free! I like getting stuff for free, don't you?
Later that day we went to see an old schoolfriend of Cor who is the owner of La Brocante, a nice thrift shop with lots of stuff from France. I bought an old stew-pan where I'm going to put in some nice colorful plants.
Posted by Anniek at 10:53 AM No comments: 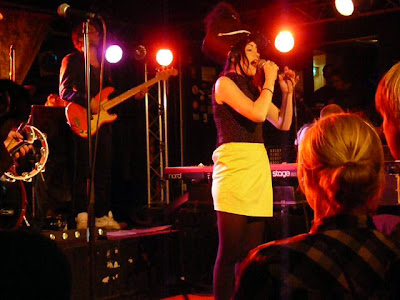 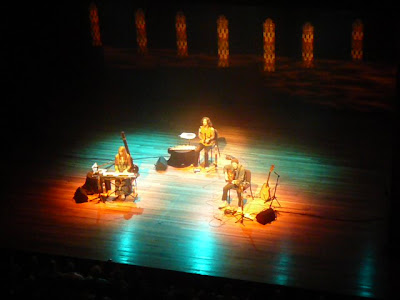 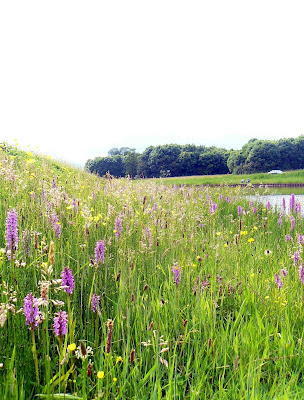 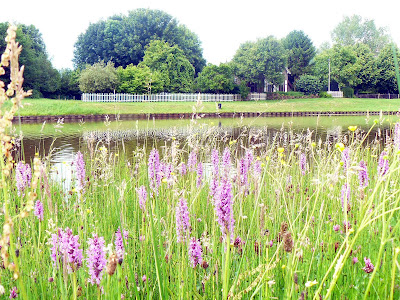 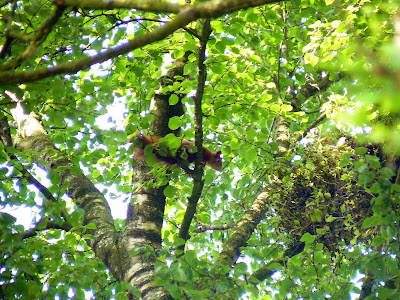 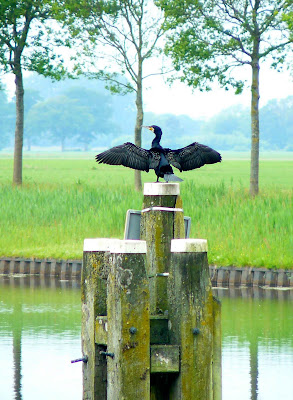 ... for not keeping you updated about my life!
A lot of things have happened these last few months and by times I feel exhausted and not in the mood to sit down and write something on my blog. I make an effort today to tell you about what is going on lately!
The bad news is that the cancer is spreading further in my dad's body and he's on morphine now. If that's not helping enough he has to get radiation. The wound on his back is healing nicely but it is still a large wound. His therapy is going great!! He can walk in between the wooden barres by himself and they have also started to let him walk behind his rollator. We keep up hope that he and my mom will end up living together in a home for elderly people. My mom doesn't like to be alone and she asks a lot of my attention.
My son is doing okay but is giving me a lot of headaches. The school he was in for the last couple of years doesn't want him anymore. He missed out on his exams this year! They want me to put him in a special school for kids with behaviour problems. I'm not thrilled about those schools for kids with autism because there are a lot of kids with acting out behaviour who are using drugs and alcohol and whom are using the kids with autism for their criminal activities. I've heard that about 70-80% of the kids with autism attending these schools end up with a criminal record. That's not what I have in mind for my son!
My relationship with Cor is still standing strong and I love him to pieces!! We both like to do things outside and go to concerts. Last Wednesday we went to a concert of Deva Premal, Miten and Manose in Almere together. I have been to their concert last year with some friends but Cor also wanted to hear them sing live. It was great to hear them sing again!
And we also went to see a Dutch singer a couple of weeks ago. Her name is Jenny Lane and she gave a fab live performance in Groningen. I just had to buy her cd called Monsters after the concert and she signed it! Just go here to see a video I made during the concert!
My creative activities like painting and scrapbooking are on the hold for some time now. I have just recently started crochet because this is something I can take and do everywhere. My dad's not much of a talker and it's very calming to sit with him and work on my bed cover.
Photos:
Posted by Anniek at 3:40 AM 3 comments: