Pictures of inside garden house. 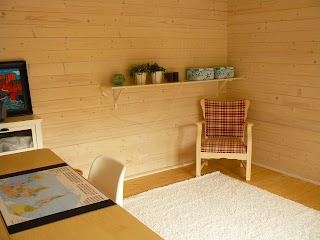 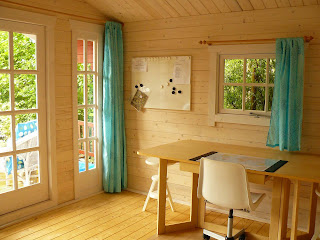 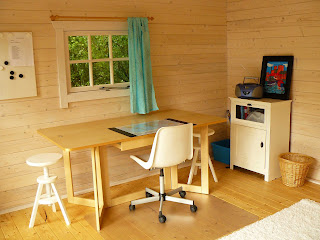 Totally forgot to upload these pictures of the inside of the garden house. This is where my son has his home program in the afternoon but I love to hang out there also when he's at school. I just love the smell of the timber. 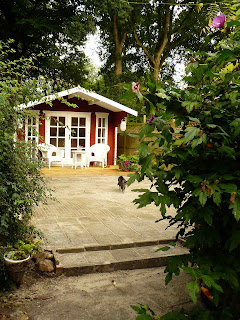 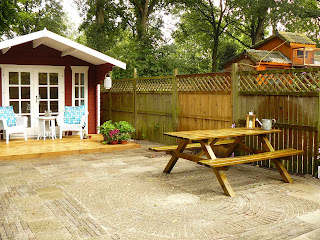 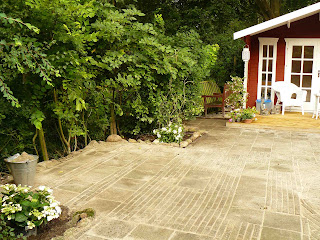 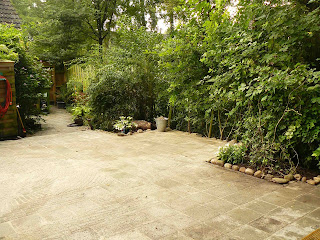 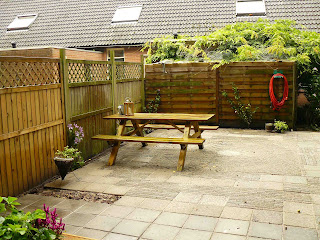 I have been so busy with the back yard and did way too much myself, but I feel sooo content with how it turned out!!

Last Tuesday 2 friends of my dad came over to finish the terrace. I helped them by telling them where to put the tiles and where the bricks and throwing new tiles and bricks to them. By the end of the day every muscle in my body ached. When they had left I decided to make some changes so I put in some tiles and bricks myself. I'm happy with that decision because it looks so much better now.
The next day I bought some plants and I put the cobbles that I already had in my old back yard around one side of the terrace.
I haven't finished decorating and planting completely but this is how my back yard looks right now!
Posted by Anniek at 4:42 AM No comments: 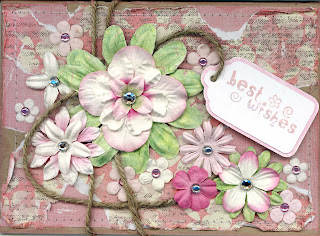 Made this birthday card for my mother today. She will be celebrating her 81 birthday tomorrow!
I was inspired by a card I saw in the latest Cards only. That card was made by Johanna Tonnessen from Norway. You really have to check her out, she makes beautiful cards!!!
Posted by Anniek at 2:14 PM 1 comment: 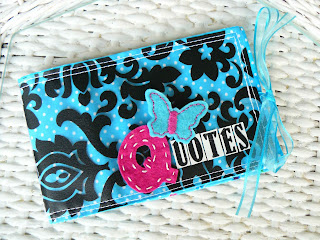 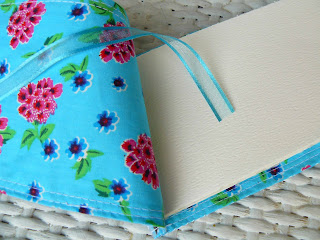 Made another fabric booklet. This time only for quotes I like. I often read nice quotes in books or magazines but I never write them down. After a while I forget all about them and that's such a shame! So now I can write them down in this little booklet!
I'm feeling a little tired today. I have been working in the back yard yesterday, preparing everything for the men whom will make my terrace somewhere in the week(s) to come. 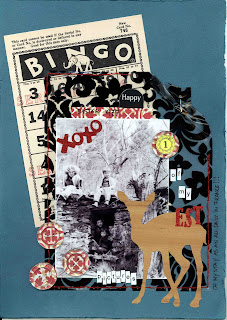 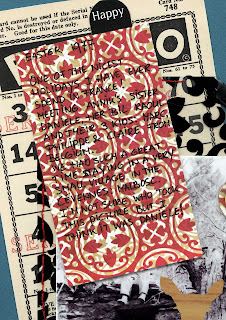 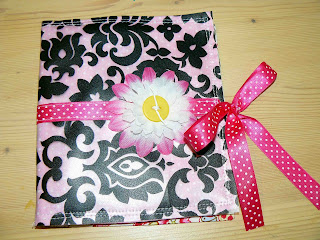 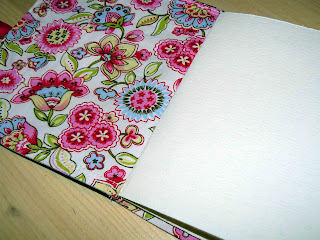 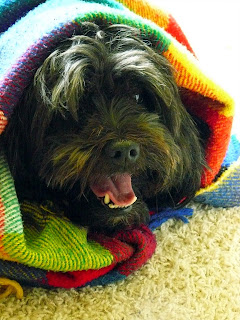 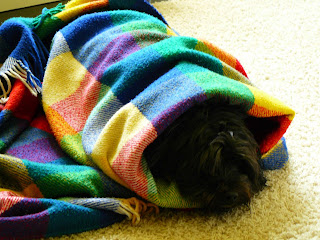 Yesterday I finally found some time and energy for scrapbooking. I made a layout with a self made sticker from woodgrain self adhesive and I used a piece of a transparant vinyl table cloth as a background.
I also made a small notebook out of the same vinyl table cloth I used on the layout and fabric.
I followed most of the directions from Donna Downey's book Fabric scrapbooking, but because the vinyl I used is transparant I made the fabric at the inside double sided.

We've decided not to keep the dog. It is way too much work for me to keep him. Zander doesn't want to walk with the dog so it's up to me to make sure he gets enough exercice. And although it's also good for me to get out of the house more often I'm starting to feel more tired by the day. He also brings a lot of dirt into the house because of his long and thick fur. And after every walk I have to clean his paws, belly and tail. When I was walking with him yesterday afternoon it suddenly started to rain and he was really, really dirty by the time we arrived home. I had to give him a bath, dry and brush him and I felt exhausted afterwards and so that's when I decided not to keep him! He also makes little squeaky sounds when he has to stay in his basket and that drives Zander crazy. He starts scolding at the dog and I have to calm him down. No, there are too many negatives about keeping him so he has to go. I hope his owner finds a good home for him because he really is a cute dog!!! Look at the pictures of him when he wrapped himself into his blanket, doesn't he look cute?! 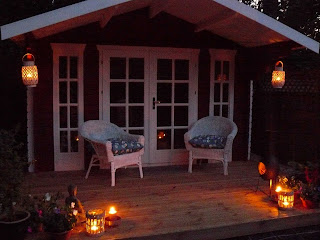 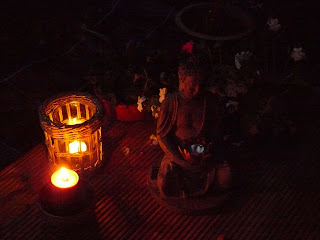 ... on my new wooden terrace. I just love to sit on my new wooden terrace in front of the garden house just doing nothing. It's almost like meditating or maybe it is!! Last night I put all the candles on and the pot heater (it is made of ceramics) and was just sitting in my white chair with new cushion (Ikea), staring in the flames and thinking of nothing in particular. On one side of the chair was the dog and on the other side the cat.
Zander was inside behind his new best friend: his laptop. He doesn't like to be outside, even though we now have wireless internet and he could come and sit outside with me.
Just 2 more weeks of vacation for him and school starts. He will be in the 3rd year of the VMBO tl. After that he has 1 more year to go and pass his exams. I hope he will be able to stay in this school because it is the best school available in our region for kids with autism. His mentor and some of his teachers of last year aren't convinced of him being able to stay in this school because of his poor social skills. I suppose they are more used to kids with PDD and not to kids with a profounder form of autism.
For my son all the social interaction at school isn't important. He goes to school because he has to learn!! One time when I was explaining him things about what his mentor told me about his poor interaction with the other kids of his class, Zander said: "Why should I have to do that? I'm going to school to study and not to play or talk to the other kids! Most of the other kids are always doing things they shouldn't be doing, like playing with their mobile during classes or talking or pestering other kids! I don't want to do that! I just want to go school to study"
Anyways, we're still having a home-program for him after school to help him with his homework and to help him with his social skills. We will also start psycho-education about his autism. He doesn't want to know much about him having autism and it's very important that he accepts his autism and learns about what are his positive and negative qualities.