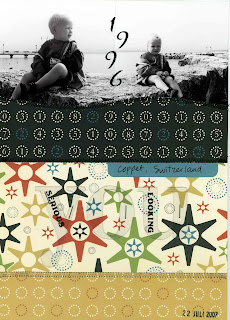 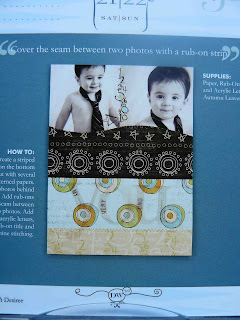 Today I made this layout with photos of Zander when he was two years old. We went to Switzerland for a couple of weeks and stayed with friends who lived in Coppet near the lake of Geneva.
It's a scraplift from a scrapcalendar from Autumn Leaves: Designing with 2007. The artists' name is Desiree.
I made the plastic letters myself from a cover for acrylic stamps. I colored all the 2's with a blue pen.
The photos I used weren't made with a digital camera. With my new all-in-one from Canon I made a scan of the photos and printed them in black and white.
I am going to do that with all my non-digital photos! Well, maybe not all, just the ones I like!
Supplies: pp & rub-ons 1996 (Scenic Route), letterstickers (market), plastic letters (selfmade), staples, sewing thread, black pen (Pilot), blue Stabilo pen, Stazon ink.
Posted by Anniek at 11:55 AM No comments: 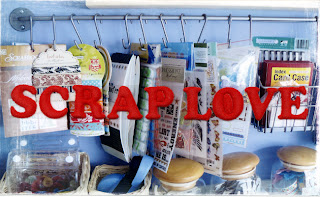 Changed my header this morning. I'm not familiar yet with Photoshop Elements 7.0, so I just took a photo, sanded the borders and put velvet letters on it. Than I made a scan (wow, my new Canon all-in-one is so cool!) and adjusted the measurements with Photoshop until it fitted in between the lines (650x401).
The bar with hooks and baskets you see on the header are from IKEA. Love that shop!
Not much going on here. We are going to leave for a short campingtrip tomorrow afternoon with one of Zander's homeschool teachers and her family. We are staying close to home on a campingsite where everyone has his own private toilet and shower! Never been on a campingsite like that before! Check out this link and you can see for yourself!
I can sleep off the floor in a foldable wagon??? It's a tent in a wagon. Go to here for an example and click on Europa camper!
Hope the weather will be sunny all week!
Posted by Anniek at 1:30 AM No comments:

I just want to share this with you! It's about The Secret!

I will try to watch it every day and I want to do what they say about the law of attraction: thinking about the good things!! I intend to forget about all that!
Posted by Anniek at 8:51 AM No comments: 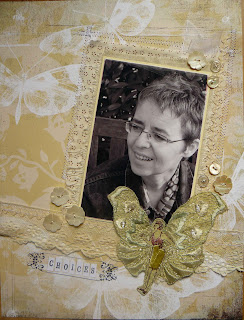 Finished the final layout for Corinne Delis's online workshop Finding You. It is all about choices. I want to make the journaling seperate of the layout, because it is very personal.
I used some really old stuff on this layout. I think the lace could be antique! I found it on a fleemarket in Paris when I lived there. And the lady butterfly is more than 50 years old. I got it from my mother and she thinks she got it when she was a little girl. So it must be about 70 years old.
The flower buttons are torn off from a very cheap bag I bought last year at a local clothing store.
I have never made a ton-sur-ton layout before but it was nice making it. I hope you like it too!

The energy of love. 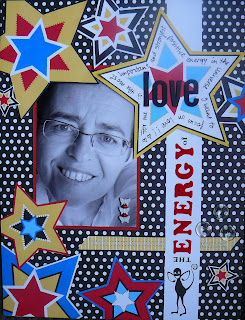 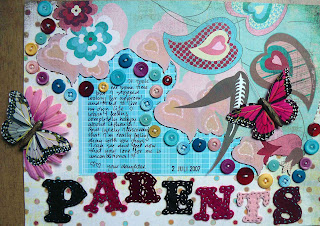 It's very weird but I can't put any titles on my blog anymore!
I finished another layout for Finding You somewhere last week. I still have to finish 2 layouts! I hope I will succeed next week. I want to give it a try this afternoon! Because I'm feeling so tired I'm not much inspired lately!
This layout is about Parents as you can see!
Supplies: pp (BG and Elsie Flannigan), feltletters (homemade by me), buttons (market and Foof-a-la), pink flower (Zeeman), butterflies (Action), embroidering thread, black pen (pilot), datestamp (Dutch store), stazon ink.
Posted by Anniek at 2:07 AM No comments: 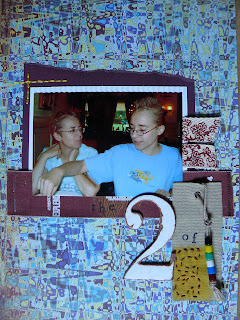 I haven't been blogging for a while. I felt really tired after my visit to Schiermonnikoog and the concert of George Michael. And the weather over here in the Netherlands is just terrible for people like me with fibromyalgia! Wet, wet, wet! It more looks like Fall then Summer to me.

Last week Zander went to the farm for a week. As a surprise for him I bought us a new computer. A much faster one then our "old" one. He was always complaining about the games he likes to play and that were working very slow on our old computer.
I also bought a wide screen (crystal) and a new all-in-one printer by Canon. I printed some photos (color and b/w) yesterday and was blown away with the result! So, I'm feeling very happy too!

Before he went to the farm I asked my son if he wanted to go to Disneyland Paris with me this Summer. At first he was very excited to go there but later on he decided he doesn't want to go there because he thinks it will be too crowded for him. Not only in Disneyland but also in the Thalys (train) and the metro. Because of his autism he doesn't like to be in crowded places. I tried to talk to him and explain to him that with a special pass for kids with autism we could avoid long queues, but he also doesn't like traveling by train. And the metro in Paris is even worse to travel with.
I wish I had an (old) car and enough energy to travel to Paris on my own!
I'm a bit dissapointed that we aren't going to Paris. This year it's exactly 30 years ago that I went to Paris to work there as an au-pair. I stayed there for about 18 months, working for the same family all the time. I'm still in contact with them!

I also found out that my father has a malicious tumor in his prostate (?). I went with my parents to the hospital for support the day he had an appointment with the specialist. My dad's 79 years old and for the moment they are not treating him. It isn't spread to his bones yet and he has no complains, so the specialist advice was not to start a treatment because of all the side-effects. My dad has always been in a very good shape because he likes to make long distances on his bicycle (racer). So the specialist wants to wait another 3 months and than check out his blood and prostate again to see how fast the tumor is growing. If it is growing fast they will start to give him hormones. We have been told that men like my father can easily live with cancer to the prostate for another 10 to 20 years! So for the moment we're not worried too much!

I haven't been scrapbooking a lot lately! Too tired!
This is a layout I made 3 of 4 weeks ago!
Used some fabric tags from clothes I bought last year!
Posted by Anniek at 12:15 AM No comments: