... haven't been here for a while! I have been busy with the removal of my parents to a home for elderly people! They both moved in on Wednesday November 24. I went to the rehab to travel together with my dad in a wheelchair cab back to his new home and his wife for 57 years. They have been living separated for almost 10 months due to his illness! My dad was very emotional when we arrived at his new home. I tried to take photos of him and my mother when they were reunited but my dad is crying on both photos. Besides that the photos are a bit blurry because I cried too!
Since they have moved to their new home I have been busy with cleaning up their old house. It has to be sold! I would have loved to buy it from my parents but I just don't have the money so I have to let it go!

In between the removal and cleaning up the house I have had some time to draw and practice the 3/4 faces from Suzi Blu's workshop La Sirena. I have to make a large painting on canvas with 3 figures. One of the faces I drew was too large for the painting and I used it to make an Art Journal page. 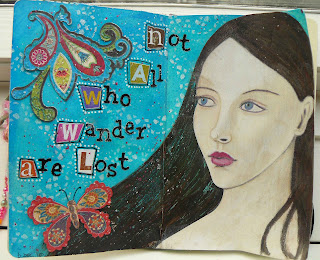 Wow I love the painting and what it says!...great are work