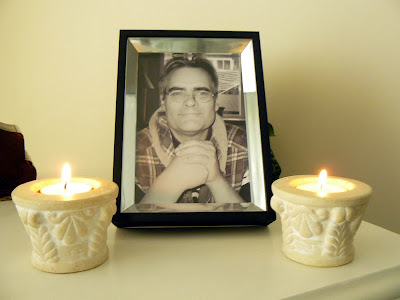 I received some not so pleasant news yesterday about the homeschool teacher, Pia, who got really very sick about 2 months ago. After they have kept her in a coma for 2 months she finally died last Sunday. I just couldn't believe it at first that she had died. So again, we have to say goodbye to someone who was dear to us!!

I also have to deal with the fact that the man I fell in love with has finally decided to stay with his friend. He told me so yesterday evening, so I really had a lot to take into yesterday!

And today it would have been Ad's 52nd birthday! I lit up a candle beside his picture and took the time to think about him and remember the good stuff.

There's also some good news to share with you: I'm finally going on vacation to France again!! I haven't been on a vacation abroad for years! I think it's at least 20 years ago that I have been in France. My French has become a little bit rusty, but because I have lived there for 1,5 years I'm sure it'll come back to me soon.
I'm going to stay in a Dutch Community Centre called 'De Natuurlijke Tijd'. The second week of my vacation I will be following a workshop Rebalancing, which is a form of massage, at another Dutch Community Centre called Ecolonie. I'm really looking forward to this.

I haven't been able to scrapbook for a long time now. I think there's too much going on in my life right now. I feel restless and leave the house very often to see my friends. The other thing is that I really need to get rid of some stuff that I piled up in my house. This also makes that I don't feel comfortable. But for now I can't find the courage to get started. Maybe after my vacation in France....
Posted by Anniek at 8:33 AM

I'm thinking of you alot. Hope things turn around for you soon!
And next time you wanna go abroad you can allway come to visit us in sweden ;-)