A rough day with my son! 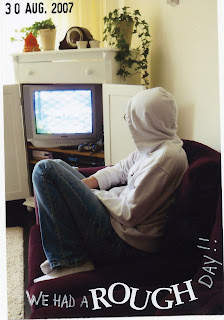 Today I had a rough day with my son! He's hard to handle now that he's gone back to school. I suppose he just has to accustom to the new teachers and classmates, new kids in the schoolcab, new subjects, like German and he also has to get used to the early hour to get out of bed.
When his homeschool teacher picked him up from school he was in a very bad mood and he kept his cap on for a long period of time, hiding himself and not wanting to speak to either his teacher or me. Well, he spoke a few words but that was more scolding.
When his teacher left he went upstairs and took a shower. After he did that his mood was better but every time I wanted to have a conversation with him about why he's so angry he started to scold again (it's all my fault ofcourse!), so when I tried a few times I realized I wasn't getting threw to him and left him alone. Did some crochet for a new layout!
When I went to the city this morning I bought a book about crochet and with the new cotton I also bought this morning I made a flower. It has been several years that I did crochet so it took me a while before I got used to the instructions in the book.
After that I made my daily something with a photo of Zander when he was sitting on the sofa with his cap on, watching Pokemon.
It's 9 p.m. and I feel exhausted! I feel I go to bed very soon.
Posted by Anniek at 11:42 AM