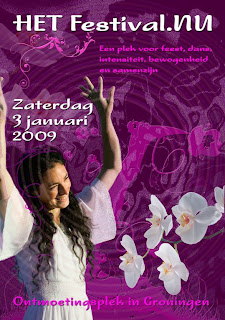 Yesterday I went to a Festival in Groningen called Festival.NU, alone!! I asked 2 friends to join me but they couldn't come. Normally that's for me a reason not to go because I feel too insecure. But this time I decided I wanted to go anyway.
The Festival started at 4 p.m. with several workshops you could choose from.
The first workshop I did was about intuitief drawing and oracle cards. That was fun to do!! The group was very large so there wasn't enough time to go deep into everybodies drawings, but at diner I was sitting at the same table as the woman that had given the workshop and she was kind enough to look at my drawing and make an interpretation.
The second workshop was given by a lady who has known Osho for real (she lived in his ashram in India) and was about Osho zen tarot and the No-Mind meditation. We had to choose 2 cards. One before the meditation and one afterwards.
My first card was called Totality. This tells something about living your live with complete attention and energy. Being total in whatever comes. Live in the NOW!!!!
The second card was called Courage. This tells something about growing into the person you want to be although life brings you a lot of hardship. There's no point fighting them or trying to avoid or deny them. You have to be courages enough to grow into the person you are meant to be.
The No-Mind meditation was fun to do. At first we had to dance. Then sit on the floor and release all the negative/positive things you had felt through out the day (or past) by using your voice. Somebody told me later that in the ashram in India people do this every evening for a period of 3 hours in a row!! And it seems that after a couple of weeks they start to feel empty and burden free!! Wow, I want that too!!
Diner was great!! The theme was India. We had a nice soupe and then rice with all kinds of vegetables, a chutney, dal and so on. As desert we had a brownie with some kind of pudding, creme and some slices of banana. It tasted delicious!!
After diner there were some other workshops to choose from. I choose the heart chakra meditation because I wanted to move and to get warm (it wasn't very warm in the building) and ready for the swing party afterwards.
The swing party was nice but I felt a bit lost and all alone because I didn't really know anybody.
So I hope next time one of my friends will join me!!

Sounds like a fun festival, which it was closer otherwise i would have come too!