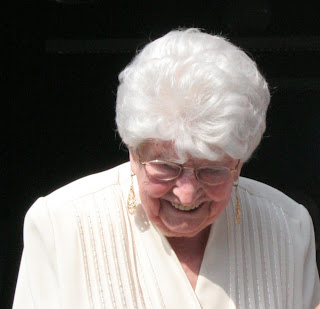 My auntie Maaike past away last Sunday at the age of almost 102!
She got a cerebral hemorrhage during her sleep and slided into a coma. The people from the Home for elderly people found her early in the morning. She was taken to the hospital to find out what was the problem and died piecefully a couple of hours later.
The ceremony will be held this Friday.
She was a flamboyant woman. She loved to wear dresses designed by Edgar Vos. Not so long ago she went to buy a new dress at the store with one of her daughters. She also liked to wear hats and high-heeled shoes.
She lost a child at a very young age and that was hard for her to accept. She also lost her husband at a fairly young age (he was around 50) and never felt the urge to remarry. Although recently my mother told me that in the Home for elderly people there were 2 men 'fighting' for her attention and she loved that and called one of them her boyfriend!
She lived alone all by herself till last year. Then she had a fall and broke her wrist and there was something wrong with her shoulder. After she had healed from all that she couldn't live on her own anymore so she had to move to this Home for elderly people in Groningen.
It's okay! I'm glad she died piecefully in her sleep. I'm sure she's reunitied now with her husband, her little son and her daughter Mieke, who passed away not so long ago.