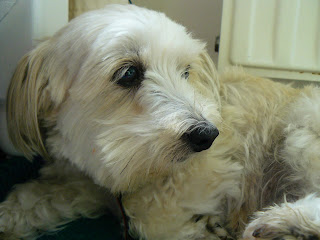 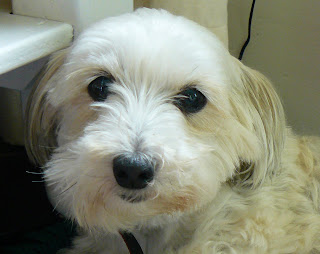 This morning my charwoman Joke arrived with a little dog (size of a normal cat) in her arms. She told me she almost hit the dog with her car nearby her home. She saw that nobody was around and when she opened the door of her car the dog jumped right in. She's an animal lover (just like me) and she decided to take the dog with her and then phone to the animal ambulance (?). When I took the dog in my arms she started to lick me right away. She was so cute, really adorable. I went to my neighbour Esther for some food for the dog. After that I went to see the vet to see if the dog had a chip. That would make it a lot easier to find the owner. But she had no chip. So they phoned the animal ambulance with a description of the dog. I told Joke that I would like to keep the dog at our home. She agreed because she has an old dog and 2 dogs were a bit to much. At one o'clock Joke left and 15 minutes later Zander came home. He was surprised to see me with a dog. I told him that if nobody would come for the dog maybe we could keep him. At that moment the phone rang and somebody asked me if it was true that I had found a little white dog. She sounded as if she was crying (she did actually) and then she asked: is she still alive? When I told her the dog was still alive she handed over the phone to her sister (the real owner of the dog) and she told me about some specific marks of the dog (like no upper teeth) and when I looked and saw that she didn't have any upper teeth, she cried and said that it was her dog Ezra and that she would come and pick her up right away. So about 10 minutes later she arrived with her sister and her little girl. They were all so happy to see Ezra. Than she told me that at 8.30 this morning she brought her little girl to kinder and then went to work for a couple of hours. When she arrived back home with her girl the dog didn't came running to them like she normally did and she was afraid that she had died (the dog is suffering from seizures (?)). But than she discovered that the dog wasn't in the house and than she panicked and called her sister who was just planning on taking a bath. The sister fell down the stairs because she was in a hurry to get to her sister (she just had some bruises). She forgot to put her shoes on and drove the car barefooted! They also told me that in the last couple of months she lost 4 of her pets (2 dogs and 2 cats), 1 dog was hit by a car and the other one had cancer. I don't recall where the cats died of! She wasn't over the death of her pets and that's why she was so emotional. Besides that Ezra was her little cutie pie that she saved as a puppy from a bad owner. She had her for 8,5 years. Ezra lost her upper teeth because a big dog grabbed her. And than she discovered that Ezra had seizures and she has to take her medication every day. So she was really attached to this dog!
What a story! I'm glad that the dog has a good home but if nobody would have come to pick her up I really would have kept her because it was love at first sight! She followed me every where and when I picked her up she was licking my hands and my face!
I had the chance to take 2 photos of her just before Zander arrived home so here she is.
Posted by Anniek at 10:40 AM

oh, she's a cutie:) glad the owner found you or she would be devastated to loose another pet!